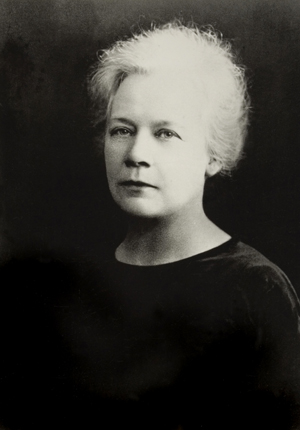 Sarah born on 28 March 1868 in Hulme, Manchester. She worked in Howarth's mill, a cotton mill in Salford,  from 1879, until 1895.  She became  an active  trade unionist and by  1889 was  secretary of the Manchester and Salford Association of Machine, Electrical, and Other Women Workers. In 1895 she went to work at the MSWTUCa s an Organising Secretary.

In  1896 Sarah married William Roger Dickenson, an iron enameller who had his own bicycle workshop; they had no children. Her marriage  was raised at a meeting of the Council on 29th September 1896. John Hodge said “valuable as was the work done by Mrs. Dickenson he objected on principle to the employment of married women, and that he therefore begged to move that two months notice be given to Mrs. Dickenson.” Mr. Mosses seconded this motion. It was defeated.

Mr. Dickson  then moved, & Mr. Flynn seconded “that the question be deferred for three  months but in the event of Mrs. Dickenson tendering her resignation in the meantime, the Executive Committee be empowered to take steps to secure a successor”. This was put to the meeting and was carried.

At the next  meeting on 8th December 1896 it was reported that Mrs . Dickenson had offered her resignation and that this had been accepted by the Executive Committee.  She had been asked tostay on until a successor was appointed. This action  led to a vigorous discussion at the meeting (which interestingly was crossed through when the Minutes were approved at the following meeting).

“Miss Dodd and Miss Cox spoke pointing out that as the work done by Mrs Dickenson was of a special character it was not in any sense an unfair competition that was involved. Her post would be excessively difficult to fill, & it could not be said that she was depriving anyone else of employment since there were at present no competition for such work.”

“that Mrs. Dickenson be requested to withdraw her resignation, as the Council value her services very highly & wish to retain them.” The following section was also crossed through in the minutes:

“Rev. T. Green Gorton said that although he disapproved of competition in the labour market between married & unmarried women he considered that this principle did not apply to the retention of Mrs. Dickenson’s services which was an exceptional case.

Mr. Hamilton (Bookbinders Society & representative of the Folders & Sewers Union) urged that Mrs. Dickenson’s services had been invaluable to the Union of Folders &Sewers & that its successes was entirely due to her work.

Miss Bulley spoke pointing out that the question of unfair competition was involved.

Miss Reddish (Women’s Cooperative Guild) remarked that such a general principle as that married women ought not to work was quite impossible of application & that it would be scarcely just to enforce it in this instance. She referred to the Cotton Trade, where married women were strong supporters of the union.“

The motion was carried 14 to 0. It was agreed to send Mrs. Dickenson a wedding present, a sewing machine.

At the meeting held on  3 October 1899 the Chair Professor Flux stated that “a letter had been read to the Executive containing the resignation of Mrs. Dickenson (one of the organising secretaries). She had however agreed to let the matter stand over on until the November Executive  Committee meeting.  Mr. J. Johnston moved that the Council approve of the action of the Executive. Seconded by Professor Weiss & carried.” No reason was given for her resignation which in the end did not take place.

Sarah  supported women’s  suffrage and joined the North of England Society for Women's Suffrage (NESWS),affiliated to the  National Union of Women's Suffrage Societies (NUWSS) set up in 1897 with Millicent Fawcett as President. The secretary  of NEWS was Esther Roper who turned the campaign towards working women.  Sarah  was active in the  1900–1901 campaign to get women factory workers to sign petitions in support of women's suffrage. When this petition, with almost 30,000 signatures, was presented to the Lancashire MPs at the House of Commons on 8 March 1901, Sarah  was among the speakers.

In 1903 she was a founder member of the Lancashire and Cheshire Women Textile and Other Workers’ Representation Committee, formed to campaign for the vote amongst women  factory and mill workers.

In  September 1904,   together with her co-worker Eva Gore Booth, Sarah  resigned her post at the Council, writing on 28 September:

Since the last Council meeting  I have  been thinking a good deal about the attitude of the Council in regards to working women & the franchise. As a Trade Unionist I should  always wish to identify myself with the women in any effort they might make  to improve their position, politically and industrially, & I  have come to the conclusion  that it would be best  for me to sever my  connection with the Council, seeing that they are not prepared to fall into line with the Women’s Unions.

The following month,  together with Eva and  Esther Roper,  she established the Manchester and Salford Women Trades and Labour Council.

In May 1906 Sarah  spoke during a large deputation to the new Liberal Prime Minister Prime Minister, Sir Henry Campbell-Bannerman, on the right of women wage-earners to political enfranchisement.

In 1919 when, the Women's Trade Union Council and the Women's Trade and Labour Council merged to form the women's group of the Manchester and Salford Trades Council. Sarah Dickenson remained active on the new body. She remained a delegate to the Council until 1930, still representing the Machine, Electrical, and other Women Workers.

Serena Kelly’s  entry on Sarah  Dickenson in the Dictionary of National Biography.

Jill Liddington and Jill Norris, “One Hand  Behind Us”: the Rise of the Women’s Suffrage  Movement (1978, reissued 2000)

Sonja Tiernan, Eva Gore-Booth: An Image of Such Politics (2012)