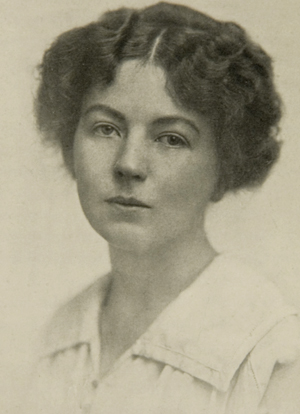 Christabel Harriette Pankhurst  was born on 22 September 1880 at 1 Drayton Terrace, Old Trafford, Manchester, the daughter of Richard Marsden Pankhurst, a  barrister active in progressive politics in Manchester  and his wife, Emmeline  Pankhurst (née  Goulden).  After the death of  her husband in 1898, Mrs. Pankhurst opened an art furnishers shop at 30 King Street, Manchester called Emerson’s. Christabel worked in the shop,  but did not enjoy it, as her sister  Sylvia recalled.

“…she detested Emerson’s. She arrived there as late as she could each morning, took  a couple of hours off for lunch, and got away as early as possible in the afternoon, stifling her thoughts by a constant succession of novels. As the registrarship necessitated attendance only during a couple of hours in the morning and evening, Mrs Pankhurst was able to give the greater part of the day to her shop. Whilst Christabel  was still in Switzerland she had engaged assistants, and had arranged for her brother Walter to keep the books, which he did as labour of love, having retired from business for ill-health. There was no obvious place for Christabel  to fill and Christabel had no desire to make one. Mrs Pankhurst was satisfied to have her daughter beside her, and if she had any regret that Christabel  sat in the dark little office all day with her head in a novel, she did not  say so.”

She began attending classes at Owen’s College and at a meeting of the Women’s Student Debating Society on 11 October  1900 met Esther Roper who took her home to meet Eva Gore-Booth. Christabel  quickly became good friends with the two wome , attending Eva’ poetry classes at the University Settlement and her reading class at the Ancoats Brotherhood. She later recalled:

“I joined their respective Committees and fought many a battle by their side, with a view to getting woman suffrage  recognised as question of urgent practical importance from the industrial point of view. This  was a stage in my political apprenticeship and great and lasting value, and I  owed much to the example and sympathy of these two friends.“

Her sister Sylvia recalled that  Christabel adored Eva “and when Eva suffered from neuralgia, as often happened, she would sit with her for hours, massaging her head. To all of us at home, this seemed remarkable indeed, for Christabel had never been willing to act as the nurse to any other human being.”  At Esther’s suggestion Christabel began studying law at the University of Manchester,  graduated in 1906  with first class honours. According to Sylvia, Mrs. Pankhurst was quite jealous of the time that Christabel spent with Esther and Eva.

In the summer of 1902  the veteran American  suffrage campaigner Susan B Anthony visited Manchester  where Emmeline and Christabel  met her. Emmeline later recalled:

“During Miss Anthony's visit my daughter Christabel, who was very deeply impressed, wrote an article for the Manchester papers on the life and works of the venerable reformer. After her departure Christabel spoke often of her, and always with sorrow and indignation that such a splendid worker for humanity was destined to die without seeing the hopes of her lifetime realised. "It is unendurable," declared my daughter, "to think of another generation of women wasting their lives begging for the vote. We must not lose any more time. We must act."

On 10 October 1903 Emmeline called a meeting at her house of half-a-dozen or so of her female comrades  in the Independent  Labour Party  to consider the situation on women’s suffrage, which ended with them agreeing to set up a new campaigning organisation. Christabel  was not at the meeting,  but afterwards  objected to their first choice of name – the Women’s  Labour Representation Committee – as being too similar to the existing Textile Workers’ Committee. Instead it was called the Women’s Social  and Political Union.

Christabel had joined the Council of the MSWTUC in 1902, no doubt at Eva’s suggestion. On 26th July 1904 a special meeting of the Council was called to consider her proposal  that the Council should campaign for Votes for Women as well as trade union organisation for women. As only six members of the Council were present it was agreed to hold a further meeting to discuss the issue.

This took place on 6th September. Christabel moved the following Resolution,  “That it is now time that the Council should bring their  policy into line with that  of the unions with which they are connected by taking active part in the effort to gain  political power for the women workers.” She said that she based her case on the growth of the Labour Representation movement among trade unionists, and the wide felt need of the franchise for the protection of the women workers’ interests. She pointed out that the Manchester women trade unionists had taken up this question strongly  and appealed to the Council  to bring their policy  into harmony with that of the unions. The resolution was seconded by Miss Rowton.

The Chair of the meeting,  A. Amy Bulley, read letters opposing any change of policy from Miss Ashton, Mrs Schwann, Mr Herford, Mr Johnston.  Miss Bulley thought that  such a change would be disastrous and that it would alienate the subscribers and friends. Miss Cox  explained that that the title of the Council was somewhat misleading, as they were not a body like the Trades Council, and did not claim to represent  the Women’s Trade Unions. Miss Crompton suggested that it was time that the women  had a separate Trade Council of their own to deal with such matters which were outside the Council’s sphere. Miss Rowton drew attention to the need  that the women  workers had  for the protection of the franchise & said that it would be a great help to the Council vis the attainment  of better wages.

Miss Bulley said that she did not think the workers would gain any benefit from the measure in question. Mr Marr was strongly opposed to any such change. After some discussion the Resolution was put to the meeting and defeated. Christabel  and Miss Rowton voted in favour:  Miss Cox, Miss Crompton, Miss Bulley and  Mr. Marr voted against.

Christabel  attended the next meeting on 4th October at which the Chair read letters she had received from a number of unions  resigning from the MSWTUC on the ground that the unions wished to take independent action on trade union matters: Shirtmakers, Powerloom Weavers, Patent Cop-Winders, Bookbinders, Tailoresses, Clay Pipe-Finishers and  Women’s  Federation. She also read out letters of resignation from their posts as Organising   Secretaries with the Council  received from Sarah Dickenson  and Eva Gore Booth.

At the next meeting on 11th  October both Christabel  and Miss Rowton resigned from the MSWTUC and left the meeting.

Christabel  now threw herself into work for the WSPU,  speaking at meeting around Lancashire. After a meeting in Oldham she met a mill-worker Annie Kenney who was in the ILP and a trade union activist and drew her into WSPU work. On 13th  October 1905 Christabel  and Anne were arrested after  disrupting a Liberal Party meeting at the Free Trade Hall, Manchester and sent  to prison in Strangeways  for a few days. On their release Esther and Eva presented the two women with flowers.

The WSPU now moved towards increasingly militant action in which Christabel  played a major role in coordinating attacks on property and Liberal politicians. Forced to go on run from the police she escaped to Paris in 1912  from  where she continued to direct WSPU militant  actions. She and her mother supported the First World War and called off  the WSPU camapign. She returned from France and spoke at many  meetings in support of the war effort, attacking her sister Sylvia who opposed the war. Her supporters handed white feathers to men in civilian dress.

After the end of the war Christabel  stood  in the December 1918 general election as a Women's Party candidate in the Smethwick constituency and  was narrowly defeated by only 775 votes by Labour Party candidate. in 1921, she moved to the United States where she eventually became an evangelist with  the  Second Adventist movement. She died in Santa Monica on 13th February 1958.

Christabel  Pankhurst, Unshackled; The Story of How We Won The Vote (1919)

Entry by June Purvis in  Oxford Dictionary of  National Biography.