Annual Meeting. It was reported that Mr. J. J. Mallon Secretary of the National Anti-Sweating League would be the chief speaker at the Annual Meeting.

Letter of sympathy to Miss Ashton. The Council was desirous of expressing its deep sympathy with Miss Ashton in the loss she has sustained by the death of her mother and a resolution of sympathy moved by Mr. Herford and seconded by Mrs. Findlay was carried unanimously.

Finance re-Underground Workrooms Demonstration. The Women’s Industrial Council wrote asking the Council to take part with ten other organisations in getting up a demonstration in London, to bring pressure to bear on the Home Office, should Mr. McKenna refuse to meet the deputation. The total cost of the demonstration was estimated to be from £15 to £20. Mrs. J. J. Findlay moved and Mrs. Tomlinson seconded that the Council take part. The resolution was carried one members voted against.

Women’s Trade Union League. The adjourned discussion re-the proposals of the Women’s Trade Union League was resumed. Mr. G.V. Cox moved and Miss Basnett seconded: “That having gone carefully into the matter the Council deems it advisable to continue its work on present lines.” This was carried with no adverse vote only one member refrained from voting.

Date of next meeting. It was agreed to hold the next meeting on the first Wednesday in February to give time for discussing the draft report.

Norwood Blouse Factory. It was reported that the Corset Makers and Sewing Machinists had gained 139 new members since the beginning of December. It was also reported that Miss Perrins an official of the Union had been appointed to a position, by the management at the Norwood Manufacturing Company, in which she would be able to advise the firm re-prices first estimates for costing new designs.

Café Workers. The Café Workers Union had again supplied the extra Xmas staff of restaurant workers at the Post Office. 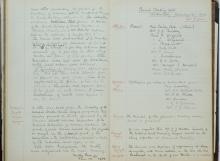 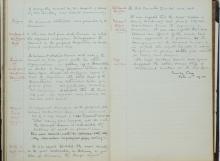