The minutes of the Council Meeting held on June 20 been were read and passed.

Mrs. Schwann reported that the Mayor of Salford and Mr. Charles Heywood had refused to become Vice Presidents of the Council, and that Father Vaughan had consented to act.

Mrs. Lyttleton moved & Mrs. Arnold seconded, that the Hon. Sec be asked to invite the Lord Mayor of Manchester to become a Vice-President of the Council.

The Union had been started at a meeting held on July 3rd when Rev. P Williamson of Dundee spoke. It began with 12 members, & increased up to 80. A loss of 30 members had occurred since, owing to the dissatisfaction among the girls at a workshop when pressure has been brought to bear by the foreman. The members had chosen their own Secretary and Committee. Subscriptions were being regularly paid in. Miss Ashwell reported the results of investigation as to wages and hours & conditions of work prevailing among the Folders and Servers and the Fancy Box Makers. Among the Folders and Servers the wages of learners were 3s 3/6d & 8s/9d and those of journeywomen ranged from 9s -11s & 12s. The chief complaint was that learners were not taught the whole of their trade. Among the Fancy Box Makers the piece work system prevailed and wages varied from 6s -14s. Complaint was made as to the low pay for handwork at several points. Mr. Flynn suggested that a record shown be kept of the results of reporting cases of insanitation to the local inspectors.

The adoption of the reports given by the Organising Secretaries was then proposed, seconded and carried.

Mr. Horsman spoke in reference to the conditions of shop life & stated that not 25 per cent of the assistants were earnng enough to keep themselves. He asked that the Organising Secretaries should be authorised to work among the women shop assistants.

Mr. Flynn stated that the tailoresses (4448 in Manchester & Salford –Census Returns 1891) were doing the same work as the tailors, and receiving wages 50 per cent less. Some of them had joined the Tailors Union but he advocated that they should be organised, and form a branch of their own, with a scale of subscriptions and benefits corresponding to that of the Federation of Women Workers 66 Grosvenor Street. He suggested that the work should be commenced among the Cooperative Wholesale Society’s women workers. He further stated that a Leeds and Manchester firm were enlarging their Manchester factory in Store St Great Ancoats Street, and advised that the organisers efforts should be directed towards forming the nucleus of a branch union among these workers and the women at the Cooperative Wholesale Society.

Mrs. Lyttleton moved and Mrs. Arnold seconded that the work of the organisers should be concentrated upon the Tailoresses and Shop Assistants while their efforts should at the same time be continued among the Umbrella Coverers & Shirt Makers.

This was put tothe meeting and so carried.

Mrs. C. C. Green spoke upon the advisability of organising the shirt makers at Gorton.

Mr. John Harker spoke with reference to the importance of united effort among the Shirt- Makers of Manchester.

Mrs. Schwann suggested that a sub-Committee shown to be appointed to deal with the question of union between the two societies of Shirt-Makers ie. Federation 66 Grosvenor Street and Shirt & Jacket Cutters Society.

A letter was then read from the Women's Industrial Council, Buckingham Street, Strand proposing that a monthly organ in connection with the Scottish, Bristol, Liverpool, Manchester and Salford, and London Councils should be started. The support of the Manchester and Salford Council was asked.

Mrs. Lyttleton proposed that the Manchester and Salford Council should undertake to guarantee the sale of 50 copies for the first year. A discussion then took place as to the policy & aims of such a paper.

It was resolved that Miss Ashwell should write to the London Council enquiring what views were likely to be advanced, and further whether the Women's Industrial Council would be prepared to accept the nomination of a Manchester representative on the paper’s Committee of Management.

The Executive Committee were empowered to decide on receipt of a reply from London whether or not the Manchester and Salford Council shall guarantee the sale of 50 copies for a year.

Mr. Harker then gave the Council some facts in reference to a reduction of prices & a strike which was taking place at Messrs John Noble’s Costume Factory, and suggested that the Council should empower its Secretaries to investigate the matter and organise the workers, who wished to form a union.

It was resolved that this should be done.

Mrs. Schwann proposed that a sub-Committee should be formed to investigate the conditions prevailing among the Cigarette makers, and nominated:

Mrs. Arnold proposed & Mrs. Lyttleton seconded that the name of Miss Amy Bulley should be added to the list of Members of Council, on account of her interest in trade unionism for women.

That the names of candidates suggested for Election to the Council, should be proposed and seconded and sent in to the Secretary in writing, and that such names should be submitted to the Executive Committee a fortnight before the meeting of Council.

Mrs. Arnold proposed, and Mrs. Lyttleton seconded that Miss Ashwell should be appointed a delegate from the Manchester and Salford Council to the Women Workers Conference to be held in Nottingham on October 20th & following days.

This was carried unanimously. 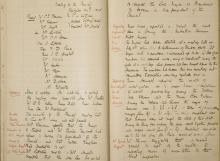 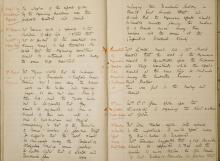 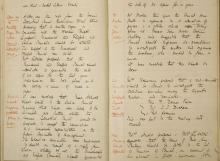 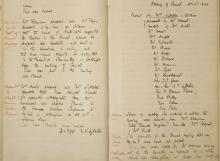