The minutes were read. It was moved by Miss Ashton, & seconded by Mrs Ashwell Cooke, that the Chairman be asked to add a supplementary minute in reference to the   correspondence with Mr Shackleton & Mr Akers-Douglas. This was carried.  After additions the minutes were approved.

The Chairman read the following letter from Miss Gore-Booth

You will find all the information about the different unions very carefully recorded in the diary, also there is a record of every meeting. I think you will understand that it will be pleasanter for  us all for me not to be present  at the Council tomorrow considering the repeated discourtesies of several of the members of the Council and the extraordinary language they have allowed themselves to use to me. I cannot go on listening to repetitions of such things. Mrs. Dickenson agrees with me in this matter.

ps in case you find the information in the Diary not full enough I enclose  some rough notes , & Mrs. Dickenson will let you have a list of meetings. As this a special meeting Mrs. Dickenson is holding the accounts over  to finish them up for Mr. Herford to go over.

Mrs. Schwann said that she had arrived at the office shortly after  2pm (the office hours) & had had to wait  in the passage till one of the members of the Council, Miss Pankhurst, arrived with the key. Mr Herford  said that apart from the  more serious questions involved in the absence of the Secretaries, it was an inconvenience not to be able to  make up the accounts. Miss Rowton  expressed her opinion that the position  was less painful in the absence of the Secretaries.

Mr. Johnston moved, Miss Ashton seconded,  that the Secretaries of the WTUC, Mrs. Dickenson  and Miss Gore Booth, be informed that as they absented themselves from their office duties, &  the meeting of the Council to-day, without permission, their appointments  are cancelled from this date. In the discussion upon this resolution the whole conduct of the Secretaries  in reference to the  secession of the seven unions from the Council was considered. It was pointed out that each of the Secretaries had signed one of the letters of withdrawal, while an official of the Council.

The letters from the unions were read again by the Chairman, giving  as the reason for  withdrawal the wish of the union to take a line of independent action. Mrs. Schwann asked if the Council had ever wished to control the action of the unions in the management  of their own affairs, & was assured that the policy of the Council  had been in later times as in the beginning to give complete independence to the unions formed.

It was reported that all the unions invited to confer with the Council had refused the invitation,  & two of the letters were read. Attention was called to the formation of a new Trades Council by the seceding unions,  announced in the advertisement in the Manchester Guardian of October 8th. (advert pasted into minutes)

It was pointed out that in all probability steps must have been taken to form such a society before the Council meeting on October 4th, when the resignations of the Secretaries were received. Miss Rowton reminded the Council that in the previous meeting a strong opinion had been expressed as to the desirability of forming such a Trades Council drawn  from the workers themelves, now or in the future. Miss Cox  said on of the most inexplicable points  in the conduct of the Secretaries was that in view  of this expression of opinion, the new scheme  should have been  kept a secret from the Council. Miss Rowton  thought the Council took an unjustifiably severe view of the action of the Secretaries. Mrs Schwann  considered they had been  dealt with most leniently. Mr Johnston  was of the opinion that their conduct was entirely unpardonable & urged that the Council could not continue to allow them to remain in its offices  & undo its work.  After further discussion the resolution  was part to the vote, & was carried; 11 members voting for the motion, & one against, two members not voting.

Mr Johnston moved, Mr Marr seconded, that the salaries  of the Secretaries be paid till the end of October. This  was carried nem con.

Miss Rowton & Miss Pankhurst  expressed their wish to resign their membership of the Council & left the meeting.

Mr Herford was asked to arrange an interview with the Secretaries to obtain the neccessary information to make up the accounts.

Miss Bulley expressed her regret that she was unable to undertake the duties of the Educational Committee for which the Council desired to nominate her for co-option. Mrs. Cooke living out of Manchester also felt unable to undertake the work. Miss Gaskell moved, & Mrs. Cooke seconded, that Miss Emily Cox’s name be submitted to the City Council to be co-opted on the Educational Committee. This was carried.

The Council expressed its wish to leave the details of work to the Organising Sub-committee.

Mrs. Schwann wished to consider how it would be possible to find out the strength  of the Council formed by the seceding unions. It was agreed that it was better to leave the unions to themselves for the present, & strong hope  being expressed that  amicable relations could be established in the future.

Mr. Marr & Mr. Johnston held that there was ample work  left for the Council in the formation of new unions, & the collecting of information.

Different ladies of the Council arranged to be in the offices during the usual office hours, for the next fortnight.

signed by A. Amy Bulley 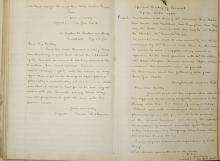 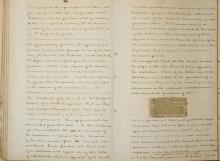 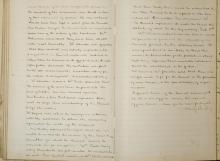