A circular was read from the Dewsbury Trade Council re locked out miners.

Mr. Herford read the Financial Report for the past month.

Miss Ashton moved, Mrs. Cooke seconded, that the Report be passed.  Carried.  Miss Ashton moved that an account be presented each month of the petty cash, and all bills over 10/s to be submitted to the chairman to be initialled & presented to the Treasurer for payment.  Seconded by Mrs. Weiss and carried.  A resolution was then proposed by Miss Ashton and seconded by Mrs. Weiss that a record of letters should be kept in the office.

Miss Cox reported that a meeting of the sub-Committee had been held at which Mr. Wilkinson. General  Secretary of the Northern Counties Weavers' Amalgamation & Mr. David Holme   President of the same   Society had been present.  Arrangements had been made to take immediate  steps to organise among the weavers.

It was reported re Folders and Sewers that a deputation, composed of two members of the Folders and Sewers Society and the Council’s  Secretaries, had waited on Messrs. Bradshaw, and that a promise has been obtained from the firm of an advance of wages for those girls who were to be employed on quarter binding  in its different forms.  A meeting of the women had been held to consider the Report of the Deputation.  It had been decided that a letter should be sent  to the firm asking for a definite  agreement as to prices.  As yet no answer had been received.

The Tailoresses had held two meetings during the month, shops had been visited and new members enrolled in the Society.

The Cap Makers were holding weekly meetings & their membership had slightly increased.

A public meeting for all trades had been arranged for March 13th  at All Saints Schools. 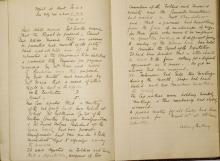