Annual Meeting. Mr.Councillor Johnston, who had been asked to undertake the arrangement, reported that the Lord Mayor have given permission for the Annual Meeting to be held at the Town Hall on Monday February 12th, also that the Lady Mayoress had kindly agreed to give tea.

Annual Report. The rough draft of the Annual Report was then gone through & various alterations made.

Next Meeting. Agreed that next Council Meeting to be held on the first Wednesday of the month at 7.30pm. 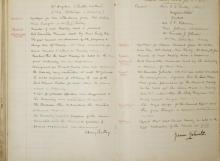