The minutes of the last meeting were read and passed.

Miss Ashwell reported that the annual meeting of the Council had been held on January 31st.  The subscribers meeting at 7.15 in the YMCA drawing room was very badly attended.  At the public  meeting which followed at 8 o’clock in the Y.M.C.A hall the attendance was better, though not quite as good as on some former occasions.  Mr. George Harwood M.P.  was in the chair and the speakers were Mrs. H. J. Tenant, Mr. Schwann M.P., Mr. G. D. Kelley J.P.,  Mr. Preston, Mr. H. J. Tenant & Mrs. Dickenson.  The Executive Committee had carefully considered what steps should be taken to ensure a better meeting next year.

Miss Ashwell then reported that owing to the illness of one of the heads of the firm  no further progress had been possible in regard to the case of the girls employed by Messrs.  Bradshaw and Blacklock.

Mrs. Dickenson reported that information was being  procured in regard to the wages of the girls employed by the Linotype  Co.  Broad Heath, that a meeting of the girls was to take place on March 1st and that steps would be subsequently taken to secure an advance in the minimum rate of wages from 8s to10s.

A letter was next read from the National Union of Teachers asking the Council to pass a resolution in support of Mr. Robson’s bill to raise the age of employment of children from 11 to 12 years.

Mrs Schwann moved and Mr. Entwistle seconded that it was desirable that this should be done. Professor Flux moved and Miss Cox seconded that in view of the importance ???  and physically  of restricting the employment of young children  the Manchester Salford and District Womens Trades Union Council earnestly hopes that the bill raising the age of employment from  11 to 12 years will receive  the support of all Lancashire members of the House of Commons.  Carried unanimously.

It was resolved that the resolution should be sent to the Manchester and Salford members, and other Lancashire members.

The question of affiliation to the Manchester branch of the National Union of Women Workers was then taken into consideration.  Professor Flux moved and Miss Cox seconded the following resolution:-

"That the   M.  S. &  D.  Womens Trades Union Council whilst thanking the Manchester branch of the National Union of Women Workers for its invitation, desires to point out that it will welcome any opportunities of cooperating in work in which both societies are interested, but  is of opinion that its own work is of so special a character that formal affiliation is undesirable. " Carried unanimously.

Mrs. Schwann moved and Mr. Hobhouse seconded that Mrs. H. J. Tenant be invited to become a Vice-President of the Council.  Carried unanimously. 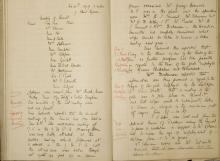 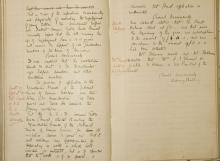