Correspondence. Letters were received from Miss A.  G. MacGowan, Miss E. Mahler & and Mrs. E.  A.  Haworth announcing the transference of their subscriptions to the Mancheste r& Salford Womens Trades & Labour Council.  Miss Bertha Mason wrote renewing subscription & asking for her name to be kept on the books.

Adults Schools.  A letter was read from Mr. C.  Russell Brayshaw asking the Council to send a representative to a conference called for the promotion of Adult Schools.  At the suggestion of Mr. Herford it was agreed not to take action as a Council - it being outside the scope of the Council’s work.

Death of Lady  Dilke.  Sir Charles Dilke’s Secretary wrote thanking the Council for their expression of sympathy & regret at the death of Lady Dilke.

Minutes.  Minutes of the last meeting were read & approved.

Annual meeting arrangements.  On the motion of Mrs. C.  E.  Schwann & Miss Cox it was agreed to hold Annual Meeting, about the first week in February, in the Lord Mayor’s Parlour providing permission could be obtained.  Mr. J. Johnston asked to obtain information as to vacant dates permission etc.

Speakers.  Several names were suggested as possible speakers for the Annual Meeting  the final selection being left to the sub-Committee for settlement.

New members.  It was agreed that the following ladies & gentlemen be asked to join the Council-

Trade Union Representation on Council.  Moved by Mr. Marr & seconded by Miss Margaret Ashton-“That the Machinists & Upholsteresses be asked to send representatives to the council, also Miss Hesse be asked for information re- Jewish Section.”

President.  The question as to choice of President for ensuing year was considered.  Mr. Marr being asked to report on the subject at next meeting.

Annual Report.  Moved by Miss Margaret Ashton & seconded by Mrs. C. E.  Schwann that the report be left to the sub-Committee for preparation & that it be read at the next Council Meeting.

Winders Special Fund Balance.  Mr. H. V.  Herford raise the question whether the balance of £20 on Winders Special Fund mentioned in the minutes of 6th June meeting be handed over to the Winders' Union.  After discussion it was agreed, on the motion of Miss Ashton & Mr. Herford, that Miss Whalley (of the Winders’ Union) be asked to attend the next Council meeting & decision to then be made as to disposal of balance.

Time of next meeting.  Decided that the next Council meeting be held on the Second Tuesday in January. 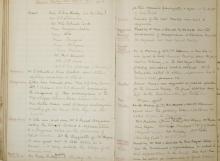 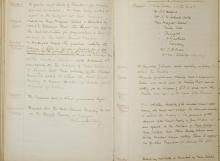