Rubber Workers & Emigration. In response to a request from Mrs. Caren Ross (British Women’s Emigration Association M/c branch) the Council agreed to make it known amongst India rubber workers that girls were wanted for a firm of Rubber Manufacturers in Montreal.

Miss Bulley’s resignation of Chairmanship. A letter was read from Miss Bulley stating that from pressure of domestic duties she was reluctantly obliged to resign her position as Chairman of the Council. Much regret was expressed. Miss Ashton moved & Miss Francis seconded a resolution instructing the Secretary to write Miss Bulley expressing great regret at her proposed resignation & requesting if possible to allow her name, as Chairman, to be used until the end of the Council’s year.

Finance. The question of finance was next dealt with. The Treasurer asked for permission to give provisional notice for termination of the tenancy of office.

Provisional Notice for Termination of Tenancy of Office.Mr. Herford proposed & Miss Cox seconded “that in view of the financial position the Treasurer be authorised to give provisional notice of the termination of the tenancy of office on a clear understanding with Landlord that notice can be withdrawn at the Council’s request, that next meeting of the Council be held on the afternoon of the first Tuesday in October to specially consider the financial situation.” 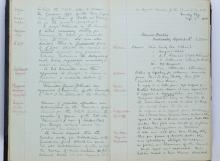 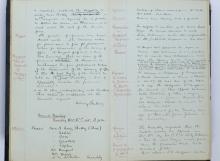