Finance. In the absence of the Treasurer the monthly accounts were submitted by the Secretary. This showed that several new subscriptions and donations had been received as a result of a special appeal.

Organisation. CWS Factories. The Organisation Report showed that the first of a series of dinner hour meetings at the CWS factories was held at Irlam others were arranged for Balloon Street, Tobacco Works Sharp Street, Crumpsall Biscuit Works, Middleton Jam Factory and the Longsight Printing Works.

Typists and Shorthand Writers. A meeting of shorthand writers and typists was held at the Onward Buildings on October 13th Mr. Herford in the chair. Miss Emily Cox and Mrs. Aldridge were present. Almost 31 typists joined the Union.

Waitresses' Union. A special meeting of waitresses was held on November 8th at the office to form a Manchester Branch of the Liverpool Cafe Workers' Union. Mrs Aldridge attended. Mrs Billinge from Liverpool was also present.

Rubber Workers Joint Meeting at Caxton Hall. A social evening with speeches was held for rubber workers at the Caxton Hall on October 30th the first of a series to held jointly with the Men’s Union in the district.

Upholsteresses. A special meeting of the Upholsteresses' Union was held on October 26 several new members enrolled.

Onward Buildings Meeting. A public meeting was under arrangement for November 23rd at the Onward Buildings. Miss Irene Cox of the Industrial Law Committee would speak on “Factory Life and Factory Laws”. Lady Schwann would preside and Councillor James Johnston would also speak.

Box Makers. It was reported that the Sub-Committee had thought it advisable to undertake the organisation of cardboard box makers with a view to securing their proper representation on the new Trade Board. At the commencement of the work it was found that the National Union of Printers, Warehousemen and Cutters were already holding meetings and enrolling box makers as members of their Society. Miss Cox and Mrs. Aldridge had had an interview with Mr. Smith the Union Organiser and as far as could be gathered from him the Union were doing the work very thoroughly. Mr. Smith offered to see Mrs. Aldridge and, after thinking the matter over, suggest ways of working jointly with the Council. This he had not yet done.

After discussion the Council agreed to leave the organisation of the work until it could be seen whether effective action was being taken by the Union.

Confectioners. It was also reported that a meeting of women confectioners would be held jointly with the Men’s organisation on Wednesday, December 1st at 56 Swan Street. 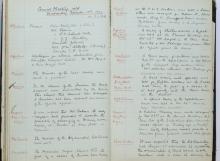 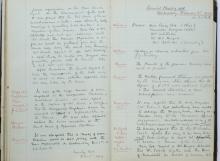