Apologies. Apology for non-attendance received from Miss A. Amy Bulley.

Finance. The Treasurer reported on finance.

Suffrage Demonstration delegates appointed. A letter was read from the “North of England Society for Women’s Suffrage” asking the Council to appoint two delegates to a joint committee for the purpose of arranging a demonstration at the Free Trade Hall on October 25th. Mrs Findlay and Miss Emily Cox were appointed. Councillor T. R. Marr moved and Mr. H.V. Herford seconded the appointment.

Cigarette Makers Settlement of Dispute. The Chairman reported that she and the Secretary had attended the Cigarette Makers’ meeting on May 7th at the Caxton Hall. Messrs. Muratti & Co. had offered, in an interview with Mr. Harker and Councillor Alison, to submit the dispute [to] arbitrators for settlement provided Union members returned to work on Wednesday morning.

The offer was submitted to the meeting and after much heated discussion was accepted by the Union members. An advance in prices had since been granted by Messrs Muratti & Co. but further time was required before a satisfactory settlement of wages and hours could be reported.

Formation of Branch of Women Leather Workers’ Union at Sheffield. The Secretary reported that the Sheffield meeting had resulted in the formation of a Sheffield Branch of the Women’s Trade Society of Fancy Leather Workers. 29 girls had joined. No previous organisation had existed and wages seemed lower than in Manchester. If the Sheffield branch proved a success efforts would be made to establish others at Walsall, London and Glasgow. 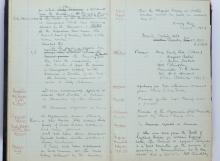 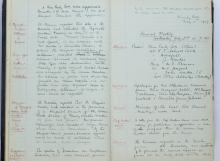