Finance. In the absence of the Treasurer the financial statement was submitted by the Secretary.

Bradford Flax Mill Dispute Fund. The Rev. C. J. Campion reported on the Bradford Flax Mill Dispute Fund. Receipts were £976.17.5½ and expenditure £978.16.½ leaving a deficit of £1.18.8 which he as Treasurer of the Fund had paid. Miss Emily Cox moved and Miss Stapleton seconded that the amount £1.18.8 be refunded to Mr. Campion from the Emergency Fund. Carried unanimously.

Proposal to cooperate with Mrs. Dickenson re-Insurance. The special meeting of the Sub Committee was called to discuss the possibility of working with the Women’s Trades and Labour Council with reference to the Insurance Act. This Council had formed an Approved Society to be registered under the name of “The Manchester Salford and District Women’s Trade Society” for which all women would be eligible for membership.

It was reported that although the Unions had already the General Federation of Trade Unions and couldn’t therefore join the Women’s Trades Society there were still a large number of women in miscellaneous trades who could be induced to join and who at a later date might form the nucleus for new organisations. Mr. Ricketts moved and Miss Kenyon seconded that Mrs. Dickenson Secretary of the Women’s Trades Society be invited to meet the officials of the Council with Miss Stapleton and Miss Guffick to discuss the matter. Carried unanimously.

Painters. It was reported that weekly meetings were being held for the Painters Calico Printers’ Engravers and that the membership was gradually rising.

Homeworkers. Seven members were reported for the Homeworkers’ Association. 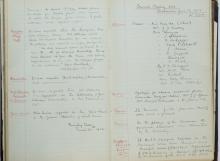 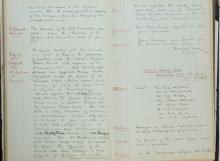