Minutes. The minutes of the last two meetings were read.

Clothiers Dispute settled. Arrears of wages refunded. It was reported that the Clothiers dispute at Messrs. Briggs, Jones and Gibson, which arose over rates of payment for work done on the new Hoffman pressing machines recently introduced in the factory, was settled on the 19th of May. The rates fixed for the machines was 9 ½ per hour for both men and women and increases on other rates obtained. The firm had not in many instances paid the Trade Board rates and this was brought to light during the dispute. Since the settlement arrears of wages had been refunded to the girls and one girl received as much as £3.19.6. A letter from the Manchester Branch Secretary (Mr. E. Watson) was read stating this & thanking the Council for their valuable aid during the dispute.

Fancy Leather Workers. Interview with Messrs. James Dewsnaps Ltd. at Sheffield. It was reported that the interview between the Women’s Society of Fancy Leather Workers and the Director of Messrs. James Dewsnaps had taken place at Sheffield on Wednesday, May 27 re-the Union’s claim for a general advance in wages sent in a year ago. An instalment of the women’s demand was conceded: the firm agreed to the following:- “That on and after January 1915 fifty two hours shall constitute a working week (reversion to fifty four hours to take place should the next balance sheet of the company not show a profit of 5%) and that wages shall be those now paid for fifty four hours. That the question of any further general advance in wages be left over till the issue of the next balance sheet and that in the meantime every attention be given to individual advances in consultation with the Union Branch Secretary Miss Rose Walker. “

Leather Workers Advance. Since the interview a year ago many advances in wages had been obtained. These amounted in the twelve months to £244.8.

Tin Box Makers Trade Board. A letter dated May 16 was read from the Board of Trade stating that the constitution and proceedings of the Trade Board would be finally settled at an early date. The Board of Trade would then proceed to establish the board and careful consideration would be given to the names of representatives sent in by the Manchester Tin Box and Canister Makers.

Miss Quaile’s holiday. It was reported that Miss Quaile was taking two weeks of her summer holiday. She would commence work again on June 22. 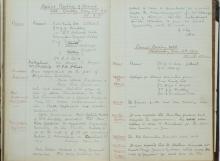 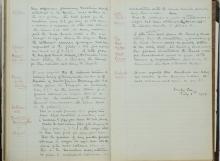