Minutes of last meeting. Minutes of the previous meeting read and confirmed.

Sub-Committee Report on Conference. The Sub-Committee reported being unable to secure the right speakers for the proposed conference re-Wages Boards, both Mr. Pember Reeves and Mr. Sidney Webb having declined the invitation. Mrs. Ramsay MacDonald has very kindly consented to come and address a small meeting. The Committee however felt that it would be better to postpone the conference to some later date when arrangements could be made for hearing both sides of the question.

Conference Postponed. Mrs. Tomlinson moved and Mrs. Eddie seconded “that the idea of the Conference be given up for the present but that members of the Council watch the progress of legislation on the subject and if deemed desirable to arrange the meetings at a later date.” Carried unanimously.

Midwives Report. The representative of the National Association of Midwives gave a report of the work done by her Association during the year.

Special Council Meeting. It was decided to call a Special Meeting of the Council for Wednesday January 22 at 7.30 pm for discussing the Annual Report and make any formal arrangements for the annual meeting.

Speakers for Annual Meeting. It was agreed to ask Lady Schwann, the Dean of Manchester and Mr. Purcell of the Trades Council to speak at the Annual Meeting, also to ask Sir C.E. Schwann as President of the Council to preside.

Finance. Mr. Herford reported on the years finance. Although there had been a considerable increase in the receipts during the year there was still a deficit of £57.10.11, £20.16. owing to the Emergency Fund and £36.14.11 to the Union Bank of Manchester. 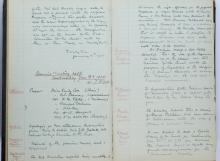 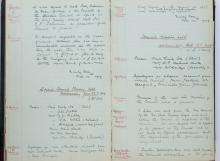