Endorsement of Chairman’s Action. Miss Cox had acted provisionally on the joint committee and asked the Council to endorse this action. Miss Ashton moved Mrs. Grierson seconded and carried nem con that the action of the officials be endorsed. It was further moved by Mrs. Cooke and seconded by Mrs. Withington and carried that in view of the industrial dangers inherent in the Bill that we appoint Miss Cox to act on the Committee and the Council to take part in the propaganda.

Finance. The Treasurer gave a financial statement for the year.

Miss Cox reported that Miss Ashton had been suspended from the Selection Sub-Committee of the Education Committee by the Manchester City Council because of a speech she had made at a public meeting. Miss Cox moved and Mr. Herford seconded and it was carried unanimously that the following resolution be sent to the Lord Mayor with a request that it should be brought before the City Council at its next meeting. Copies also to be sent to the press.

That the Women’s Trade Union Council, representing 17 women’s Trades Unions in this district, wishes to enter an earnest protest against the action of the Manchester City Council in removing Councillor Margaret Ashton from the Selection Sub Committee of the Education Committee. The W.T.U.C. has greatly appreciated the splendid services rendered by Miss Ashton in the furtherance of education in Manchester, and in common with all the other societies formed to advance the interests of women, it has placed a high value on her unwearied efforts to promote the better training of girls in our primary, secondary and technical schools. The WTUC attaches the utmost importance to the principle of individual liberty of speech and action outside the Council Chamber for members of the City Council in all matters not touching their joint Council work. It deplores the assumption of the Council of a censorship of the views of its members should in Miss Ashton’s case have resulted in curtailing the usefulness of her educational work.

Annual Meeting. Miss Cox reported that she had seen Sir Daniel McCabe and he suggested that the Council should leave the matter in abeyance and to see him again on the question of getting a room in the Town Hall for the Annual Meeting on February 9th. Failing this it was moved by Miss Ashton seconded by Mrs. Grierson and carried that the Memorial Hall be taken.

It was suggested that if the Memorial Hall be taken Sir Daniel McCabe be asked to take the chair. Miss I. O. Ford, Councillor J. R. Davies, Mr. G. K. Grierson had promised to speak.

It was decided to hold a special meeting of the Council on January 26th to go through the proof copies of the Annual Report.

The Secretary was instructed to get new blinds for the windows to comply with the new lighting regulations.

Mr. Herford kindly proposed to arrange for the Audit, in view of the fact that the regular Auditors might not be able to do it this year. The Council agreed.

The Sub-Committee minutes were read.

A meeting had been arranged for the girls working at Reynolds Clothing Factory and several visits had been made to the works.

The Secretary had attended the first meeting of the new branch of the Clothiers' Union in St. Helens.

Tin Box. This Union had set up an agitation among the girls working in the printing department of Messrs. Wilson’s to get their existing rates of wages brought up to the Trade Board rates. A deputation of girls were appointed to interview the manager and after three interviews the whole of the girls got an increase in wages varying from 1/- to 2/-per week. Many new members were made. 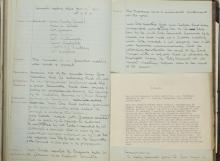 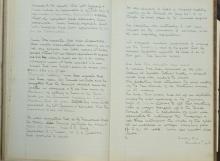