Minutes. The Minutes of last meeting were read and passed.

Finance. The financial report for the month was presented by the Treasurer.

Lockout at Blair’s 150 girls affected. The Secretary reported that the threatened lockout had taken place at Blair’s. 150 girls were thrown out of work. The lockout lasted for a week. Miss Cox and Mrs. Aldridge had interviewed the firm with several of the girls affected. In the settlement one small concession was made by the girls viz that all work actually in the machines should be done at the lower rate meaning a loss of from one penny to two pence to each of the twelve girls, a clear and definite promise being obtained from the manager that the old rate of 7 per dozen pairs would be paid for every additional pair given out, whether given out in no.4 or no.6 room. All the girls returned to work in their old places. 50 new union members were enrolled.

104 of the girls were members of the Union and received financial help from the organisation during the lockout. The remaining 46 were non-members and as their case was a very hard one the Secretary, with the sanction of the Chairman and Treasurer, paid each of these girls 1/6 from the Emergency Fund.

Mr. H. V. Roe. The Secretary reported that Mr. H. V. Roe had asked her to inspect his work room and wages books (at the Brownsfield Mills) with a view to suggesting alterations in any case where wages etc. were below the standard. 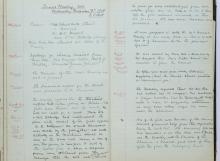