It was reported that the meeting had been called a week earlier than usual owing to the holidays.

Arising out of minutes, a short report on the garden party was given by the Secretary, and it was moved by Miss Ashton, seconded by Mr. Herford and agreed that the best thanks of the council be sent to Mr. C. P. Scott for the use of his garden , and also to Mrs. Muter Wilson, Mrs. D’Augier and all the helpers for their valuable assistance.

The question of the telephone was left over for consideration at another meeting. It was reported that the representatives had attended the meeting at the Ladies Club on July 18th on the invitation of Miss Ashton, and that after an informal talk it had been decided that Mrs. Robinson, as Secretary of the Women’s War Interests Committee, should formulate a scheme and send it to the different organisations for consideration.

In addition to this report, the scheme drawn up by Mrs. Robinson was read to the meeting, and Mr. Purcell reported that the Executive of the Trades and Labour Council had decided that Mr. Mellor and himself should attend the next meeting. It was moved by Mrs. Findlay, seconded by Miss Ashton and agreed that the whole matter be left over until the conference was held at which the Trades and Labour Council’s representatives would be present. It was moved by Mr. Dale, seconded by Mrs. Cooke and agreed that Miss Cox, Mrs Findlay, Miss Ashton and Miss Quaile represent the Council at the next meeting.

It was reported that the Secretary and the Treasurer had attended the E.C. meeting of the Trades and Labour Council at which Mr. Purcell had presided and placed the financial position of the Council before them. The Treasurer had pointed out that it was getting more and more difficult to rely upon private subscriptions and urged that the Trade Unions should contribute more generously than they have done in the past. Miss Quaile dealt chiefly with the work done by the Council for the various Unions. Mr. Purcell confirmed all that had been said by the Treasurer and Secretary and pointed out that the E. C. of the Trades and Labour Council were quite alive to the fact that the work was of great value to the organised trade unionists of Manchester. It had been decided to hold over any decision with regard to the matter, until the meeting to be called by the Women’s War Interests Committee had been held.

It was decided to leave over the organisation report until the next Sub Committee meeting. 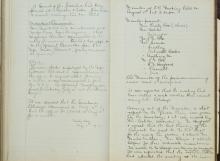 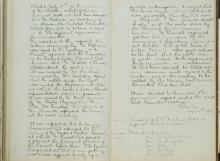